Ok, so last year there was a new scoring system (which I think went rather well).
Not to be outdone, there’s another big change this year:
I'm no longer accepting bracket contest entries via comments in this thread.

Instead, I’m dragging the ACHA M1 Nationals Bracket Contest into the late 20th century with a web form and some automation on the back end (that’s what she said!). So, instead of me having to copy all your picks over by hand, the whole contest will be almost entirely hands-off. At least, that’s the plan.

And because I like tempting fate and poking lady luck in the eye, I am also opening the ACHA M1 Nationals Bracket Contest to the wider internet; not just this forum. If this experiment in modernity fails, it might as well fail big, amiright? So, keep an eye out on all the social medias (and by “all” I mean probably just the tweeter) for a link to the entry submission form, and do please share it around. Yes, I’m also posting the link here… and though I’m not accepting submissions via comments, do feel free to post your entries for discussion purposes.

Here’s the submission form: https://forms.gle/YEnE8rASgRmpFjur8
And be sure to follow the scoring over on Google Sheets.

Anyway, here’s how it’ll work:
Like last season, instead of fixing the number of points for each game, I’m letting the market decide: The more people who choose a certain team to win, the lower your reward for picking that team. For example, in the play-in round, you effectively get 1 point to invest in each game. If you pick incorrectly, you lose that point. If you pick correctly, you get your original point back, and the points lost by people who picked the other team get divided equally among those who picked correctly.

It sounds more complicated than it is… think of it like throwing bets in a pot and dividing the pot among the winners.

Here’s how many points you’re “betting” on a result in each round:

DEADLINE FOR SUBMISSIONS IS MIDNIGHT BEFORE THE PLAY-IN ROUND

Last year, there were only 9 people who submitted a bracket.
This year, there are already 48 entries in just the first 12 hours.

Up to 65 entries now. The closest contest, perhaps unsurprisingly, appears to be #8 Arizona vs #9 Illinois, with 32 and 33 people picking them to win Game 12, respectively. … Ok, literally as I was typing this another person submitted an entry, so now it’s 66 total and a 33/33 split for Game 12.

The most lopsided matchup, as one might be able to guess, is #13 UCO vs #20 Niagara, with picks at 59 and 7 respectively. But a very close 2nd is the Game 9 matchup between #5 Minot and #12 Jamestown, with picks at 57 and 9. That surprises me; these two teams play each other a lot, and this season Minot hasn’t fared too well at just 3-3-3. Game 9 might be a good opportunity to collect points by picking an unpopular underdog.

Don’t forget: you’re only allowed one entry, but you can go back and change your picks up until midnight before the play-in round.

81 entries now, with 80 uniques (only one entry duplicated another).
I find that remarkable; I would’ve predicted a lot more overlap.

Two clear favorites, and yet, nearly half of all entries are picking someone outside of Adrian and Liberty, despite how dominant each has been over the season.

I rather like a ranking system called KRACH. It’s calculated like a big game of “team A beat team B, who lost to team C” and so on. One nice thing about this ranking system is that you can take two teams’ calculated ratings, and easily come up with an expected % chance that one would beat the other in a head-to-head matchup. Today, I ran a bunch of numbers… like, a lot of numbers. Numbers for every possible matchup and outcome over all 19 games at Nationals.

Here, according to their KRACH ratings, are each team’s chances of winning in each round:

And here’s how the wisdom of the crowd compares for the final: 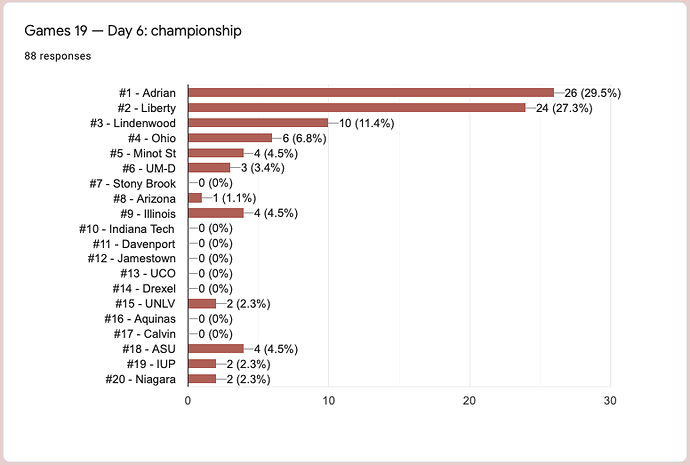 What will happen if Stony Brook is not able to go because the University isn’t allowing any club sport team to travel due to the current circumstances.

Your guess is as good as mine. I’m not affiliated with the ACHA, and I’m certainly not involved in their decision-making.

As far as this bracket contest is concerned, I probably just won’t score the round, if a team has pulled out.

Hey guys, it pains me to say this, but out of an abundance of caution and concern for participant safety, I’m shutting down this bracket contest and will be thoroughly disinfecting the bits it was using in the cloud.

Stay safe, and remember to practice good online hygiene, and to keep your anti-virus definitions up to date.